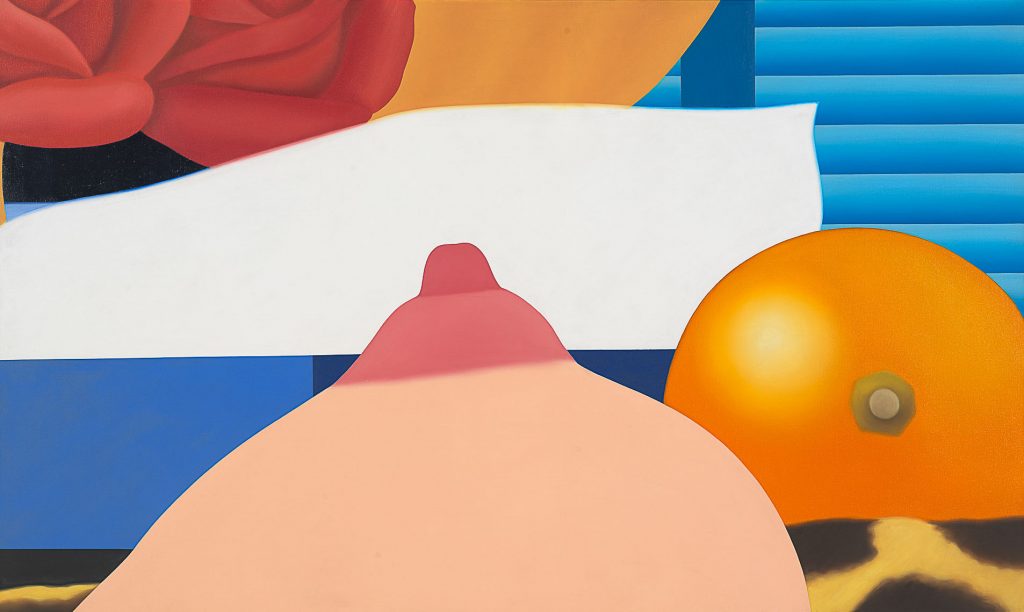 Wesselmann first gained critical acclaim in the early 1960s for his Great American Nude series. Many of these lounging female subjects, with pouted lips and tan lines, were painted in patriotic red, white, and blue, combining the prototypes of Western figure painting—from Titian to Matisse—with the high voltage of American advertising. After the Great American Nude paintings, Wesselmann shifted his focus, exploring more intimate, close-up views of the nude in the Bedroom Paintings.

At Gagosian, a selection of Bedroom Paintings made between 1968 and 1983 reveals the full breadth of the series that Wesselmann considered so central to his oeuvre. Fragments of the human body, such as a hand or a breast, are juxtaposed with objects common to the bedroom—a light switch, flowers, the edges of pillows and curtains. These large-scale compositions draw attention to the abstract properties of each depicted form, the interlocking positive and negative shapes evoking the technique of collage in areas of sharp delineation, bold color, and softly rendered detail. In Bedroom Painting #63(1983), the bedroom is framed by a female nude, her arm, torso, and thigh forming a triangular window. Although she is not at the center of the image, her presence is unmistakable, determining the complex shape of the canvas.

The first time I broke the rectangle, it seemed like a big deal, even though it had been done for years in advertising.
—Tom Wesselmann

At Almine Rech Gallery, the key work Nude with Lamp (1977–80) is accompanied by related paintings and works on paper. For Wesselmann, Nude with Lamp posed two challenges: the eccentric shape of the canvas and the chiaroscuro of the nude in shadow. While his first shaped canvases were determined by the silhouette of a single depicted object, as in the Smoker series, later works such as Nude with Lamp are shaped according to their own logic, rather than that of the painted image, utilizing the blank space of the bare wall behind. Repurposing the formal elements of advertising, such as shaped posters and cutouts, Wesselmann complicates the relationship between his female figures and their environments, their long, tanned legs often appearing to extend beyond the two-dimensional surface. After Great American Nude #100 (1973), his titles became more descriptive, even personal, sometimes naming the model, as in Pat Nude or Barbara and Baby, detailed studies of which are included in this exhibition.  Wesselmann commented that these works were “his first attempts to be emotionally touching, on levels other than sexual.”