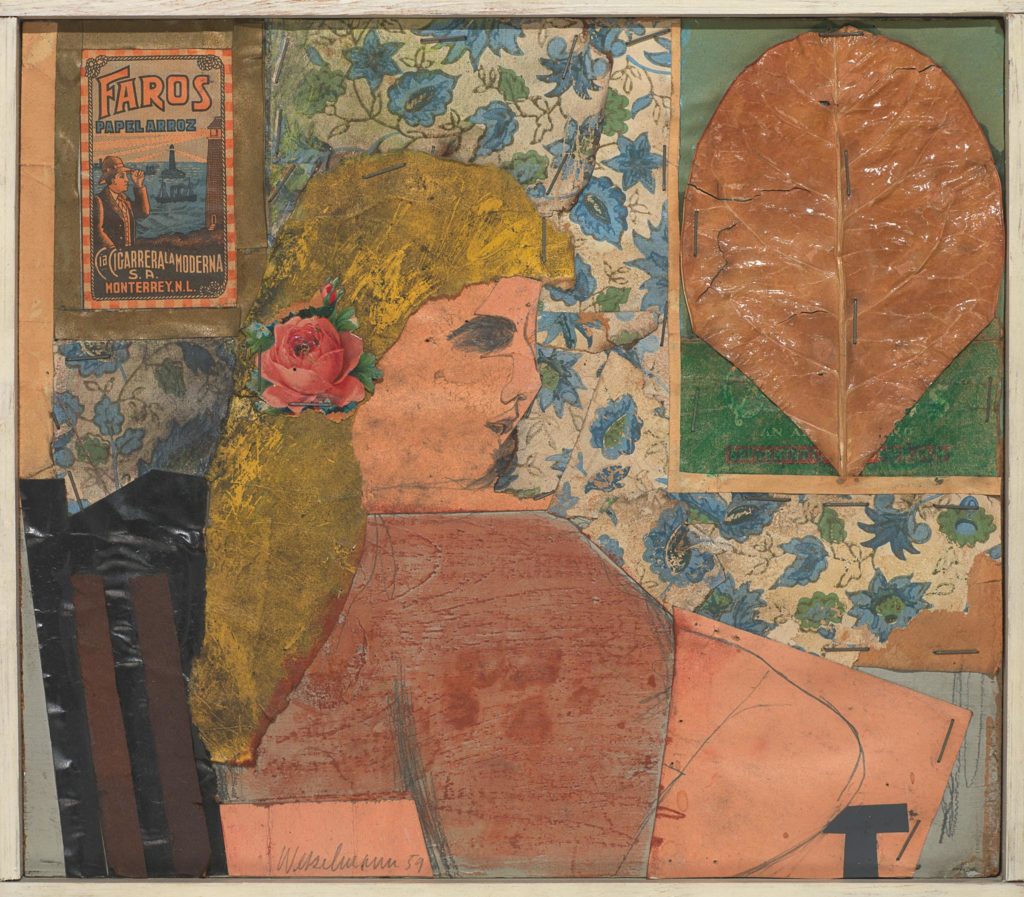 David Zwirner is pleased to present an exhibition of collages by American artist Tom Wesselmann at the gallery’s London location. Organized in collaboration with The Estate of Tom Wesselmann, the exhibition will present over 30 works produced between 1959 and 1964—a significant period spanning the artist’s early career and his emergence as a leading figure of Pop Art.

Since the mid-1960s, Wesselmann’s oeuvre has been synonymous with the bold, graphic, and large-scale imagery of Pop Art. On view at the gallery, his intimate, handwrought collages of the late 1950s and early 1960s reveal the germination of his iconic style, and attest to his lifelong interest in depicting still lifes, interiors, landscapes, and female nudes.

Wesselmann first explored the medium of collage in 1959, during his final year as an art student at The Cooper Union School of Art, New York, and it remained central to his practice throughout the early 1960s. Part of a generation of artists that reacted against the dominant action-oriented, gestural style of Abstract Expressionism, Wesselmann took interest in quotidian, figurative, and popular subject matter, as well as the representational and graphic qualities afforded by collage. Employing found materials culled from urban detritus and popular media such as postcards, wallpaper, stickers, and fabric, Wesselmann executed several discrete but related series of collages that variously depict figures (both anonymous and known), interiors, and still lifes. Formally, the works relate to early modernist collage and assemblage techniques and practices and, in their subject matter, make numerous art historical references to the works of Henri Matisse, Edgar Degas, Wassily Kandinsky, and Hans Memling, among other artists. In his later collages, representations of contemporary life and consumer goods become more prominent, evolving into the large-scale Pop Art paintings for which Wesselmann became recognized.

Among the works on view will be several significant examples of his “Portrait Collages,” 1959-1960, the first group of collages executed by the artist. Characterized by depictions of one or two female figures seated in interior spaces and rendered in diverse materials including leaves, wallpaper, paint, and wood, the series makes frequent allusions to works by Old Masters, as well as contemporary artists, such as Willem de Kooning and other Abstract Expressionists. These first iterations of collage, in particular, are marked by dynamic patterning, idiosyncratic material juxtapositions, flattened forms, and rich, vibrant color that would remain consistent features of his work throughout his career.

Also included in the exhibition are a number of works from Wesselmann’s “Little Great American Nudes” series, a pivotal body of work begun in 1961 that led directly to the development of his larger-scale “Great American Nudes,” 1961-1973, for which he gained art-world acclaim, and of which the first example, Great American Nude #1, will be on view.

Begun in 1962, Wesselmann’s “Little Still Life” series demonstrates the artist’s increasing interest in depicting contemporary, popular subject matter such as food, articles of clothing, and flowers, which he typically represented in tabletop displays. Like his nudes, this series increased greatly in scale, as evidenced in his 1963Still Life #29—one of the artist’s first large-scale still lifes, of which only a small number exist (one example is in the collection of the Whitney Museum of American Art, New York). As Marco Livingstone has remarked regarding the artist’s collages, “Wesselmann was able not only to make art that reflected his identity and the circumstances of his life, but also to expand on the advances made by the previous generation towards the establishment of an art that could be defined as specifically American.”1

Tom Wesselmann (1931-2004) is well known for his collages, paintings, and sculptures depicting still lifes, landscapes, and nudes. He attended The Cooper Union School of Art, New York, from 1956-1959, and was co-founder, with artists Marcus Ratliff and Jim Dine, of the influential Judson Gallery, New York (which operated from 1957 to the late 1960s). In the 1960s, he emerged as a leading figure of Pop Art.

Marco Livingstone is an art historian and independent curator who has published extensively on art since the 1960s. He is an authority on Pop Art, and his publications include Pop Art: A Continuing History (1990), as well as monographs on David Hockney, R. B. Kitaj, Allen Jones, Jim Dine, Patrick Caulfield, and Peter Blake, among others. Since the mid-1980s, he has curated major survey exhibitions of Pop Art in the UK, Portugal, Spain, Italy, and Japan. He curated the first retrospective devoted to Tom Wesselmann’s work, which originated in Japan in 2003 and traveled throughout Europe in an altered version. In 2012, he co-curated Wesselmann’s first North American retrospective, which opened at the Montreal Museum of Fine Arts and subsequently traveled to several venues in the United States.

For all press enquiries and to RSVP to the 28 January press preview, contact