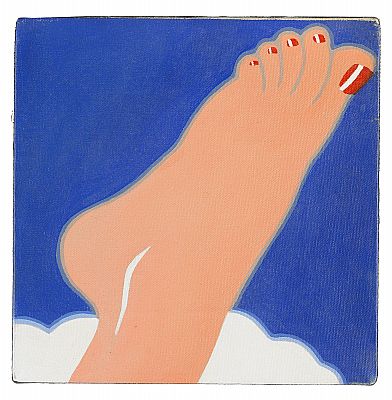 The Hall Art Foundation is pleased to announce Deep Blue, curated by American artist Katherine Bradford. This group show examines “deep blue” both visually as a color, but also as a phrase that can describe more abstract concepts such as mood, the natural environment, music and even a region’s political landscape. Over 70 paintings, sculptures, photographs, works on paper and videos by 70 artists from the Hall and Hall Art Foundation collections will be included.

In recounting her inspiration for the show, Katherine Bradford says:

I heard a newscaster use the phrase “deep blue” in describing an area of the United States and, being a painter, I immediately felt the force of that phrase both visually and politically. It was very reassuring to hear and to picture….

While Barbara Kruger’s Face It (Blue) (2007) can be interpreted as a cynical critique of American advertising and consumer culture, it might also be read as a call to action – prompting us to face the challenges and disappointments of America’s problematic history and current state. Yet, despite the difficult realities we must confront, one might also find comfort in a notion that we remain surrounded by deep blue – in our overhead sky, in the air that we breathe, the water in which we swim, as vast fields of lush color, and even in our triumphant political maps.